Recently, I had a good friend of mine ask me what the difference between Autism Awareness and Autism Acceptance was. In the moment, I gave a little chuckle and quickly and jokingly retorted “a word.” I then explained what I thought the difference was…… which I will get to that later.

April is the month that has been deemed “Autism Awareness Month.” While every parent of a child with Autism Spectrum Disorder (ASD) will tell you that every day, of every month, of every year is Autism Awareness Month in our world, April is the month that our voices are a little louder than usual when talking about our amazing kiddos and their superhero powers.
Naturally, this comes with an increase in social media posts (guilty as charged), and it wasn’t until this friend asked me this simple question that I started to realize the angst these two words seem to cause, particularly in the month of April. Earlier this week, I was reading a slightly heated debate between two parents on which phrase we should all be using. So me, being the parent of a child with Autism, of course I started perseverating on these two words. Acceptance, Awareness…… Awareness, Acceptance. This is what Good Old Mr. Webster has to says:
Acceptance; noun; 1 the act of taking or receiving something offered. 2 favorable reception; approval; favor. 3 the act of assenting or believing: acceptance of a theory. 5 the fact or state of being accepted or acceptable.

Awareness ; noun; 1.the state or condition of being aware; having knowledge; consciousness.

For me, I can’t really see what the debate is about. In my humble opinion, I think the two go hand in hand. Now, hear me out on this…. I, personally, have never been someone who just accepts everything at face value. I research, I read, and I try to gather information. I try to make myself aware of the ins and outs of that particular topic.

I think back to when I first started to realize that my son was on the Autism Spectrum. Like many of you I’m sure, most everyone told me that his language would come, that boys develop slower than girls, and as a mother, I desperately wanted to believe them. Had I not grown up with two cousins with what was traditionally known as Asperger’s, I would have not known the signs, and would not have continued to research my sons lack of eye contact, absence of language, and aversion to social situations. However, the more I became aware of what was under this complex ASD umbrella, the more I began to accept that my son was apart of this incredible club I didn’t really know existed. I know that I am making it sound flowery, and happy, but believe me when I say that there have been a lot of tears, and headaches, and meltdowns, and breakdowns to get to this point.

When my son was still a preschooler, I remember having a conversation with a Dad at a playgroup that I was at. My son had had an epic meltdown the previous week, and over a cup of coffee he politely and jokingly brought it up. I explained that my son was going through being evaluated for Autism, and that making transitions and being in social situations was difficult for him. He looked at me with slight confusion and shared with me that he had always thought that people who had Autism were not as functional as my son. I know some of you reading that may have scoffed or rolled your eyes at such a comment, but I could tell that in that moment, I had taught him something new, and made him more aware of the very wide spectrum that is Autism. We continued to talk, and he engaged me in a Q & A, and I can tell you to he left that day with a new level of acceptance for Autism.

You see without awareness, how can we expect acceptance? Of course the world needs to know about our amazing kiddos! How could we not want them too? They have changed each and every one of our worlds, and made them brighter, and full of hope.

So this April, instead of focusing on whether we should have awareness or acceptance for Autism, we can instead realize that we are all in this together, and that awareness is the seed that grows the tree of acceptance. 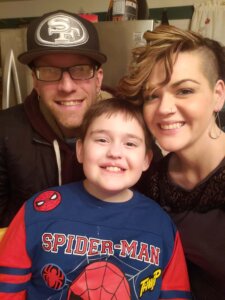