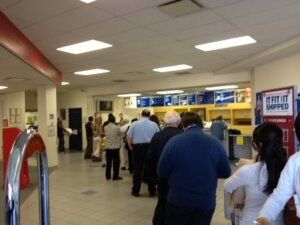 In a week that had many situations not go as hoped I found myself clinging to a random exchange with an almost stranger.
We as a family needed new or renewed passports. As with anything requiring paperwork and interaction with government agencies, this became a multi-step process.
I happily allowed my husband Brian to pull all the paperwork together. Multiple forms to be printed off a government website. Digging and diving through file cabinets and home offices to pull together the appropriate identification.
Weeks passed as we tried to get photos taken and then attempted to coordinate a time where all of us could meet at an agency that could process a new passport for Amanda, my 22 year old daughter with special needs, and son Jason, who’s last passport was before he was 16.
Finally, giving up on all four of us going together, I loaded Amanda in the car and grabbed Boychild after school at 2pm. last Thursday and rushed to the nearest post office to hurry get this done before all the Holiday gift shipping began. No cars in the parking lot! No line in the office! And apparently, even though there are HUGE signs everywhere saying “Get Your Passport Here” and “Passport Processing Here”, only one person is staffed only until 2pm. from now through the Holidays.
Attempt 1 failed!
On Monday of the following week, I once again grab Boychild, my yellow envelope with materials, and daughter Amanda and head to the second nearest post office.
Kinda, sorta, no line….well just a little one. One person in front of us who was also getting a passport and friendly chatted with us about less than flattering photos and the process. A process that included her having to get a new birth certificate as the one she had did not have a raised seal.
Warning bells went off in my head. My daughter Amanda has no government identification that I could think of and I clearly remembered not seeing a birth certificate in the yellow envelope I have clutched in my now sweaty hands.
Ever hopeful, when lovely lady in front of us is done and happily on her way, we stepped up to the plate. The gentleman at the desk was ever so helpful. He pulled all our documentation out and organized it by passport attemptee.
And yep….as Amanda is telling him that she needed to get out of there before her beloved karate class at 7pm. he smiled and said, “Yes, Amanda, we can do that, but you will need to come back again. I look forward to seeing you.”
So….two passports applications sent off. One to go.
Attempt 3.
The next day, at 10am. I headed back to the second nearest post office with Amanda in tow. She now knew the drill. She has all her documentation, including birth certificate with raised seal, to present to the nice gentleman at the counter. We were thrilled and she announced as we enter, where there was a long package shipping line, “Mom, look, the same guy!”
There he is, giving every person ahead of us time and energy, and not rushing…which is wonderful until you are 3 people back in the queue.
We once again stepped up to the plate. Amanda handed him all the documentation, which he organized as it should be, he smiled and announced we have everything we need. He then proceeded to explain that processing usually takes 4-6 weeks but if we are lucky it will be done in 3.
I laughed and said, “You clearly don’t know me as you can see I am not lucky.”
He looked back at me and said, “Why yes, you are, you know Amanda and that makes you lucky.”
Everything in my complaining, agitated brain stopped.
Yes, I am lucky and thankful.
He said, “I bet you didn’t think of it that way.”
In the moment I didn’t. But now I did. I smiled and thanked him. Wisdom comes from unexpected places sometimes. Take it and move forward.

This Blog was written by Deb Cavanagh