Morgan was born with a minor birth defect that quickly turned into 17-day brain infection, and the result would change the lives of the Daly family forever. She is now blind, non-verbal and has little control over her arms and legs.

“Morgan understands everything that’s going on, even though her body can’t communicate well in most cases,” her mother, Michelle, explains.

Since having Morgan, Michelle and Peter have found it nearly impossible to spend time together as a couple.

“Morgan is essentially a full-time job. She is over 50 pounds now and we physically lift and move her around,” her father, Peter, says.

Morgan’s condition requires the Dalys to be with her nearly 24/7; while one of them is paying attention, the other is having their time “off.”

Michelle and Peter knew from the start that nurturing their relationship was important, but it wasn’t until they discovered David’s Refuge that they finally made it a priority.

The Dalys were family friends with the founders of David’s Refuge, Brenda and Warren Pfohl.

“It’s amazing what David’s Refuge has done in terms of taking the idea that it’s important for parents to spend time as a couple. It was the first time we spent together since Morgan was born,” Peter says. But settling into a David’s Refuge weekend isn’t always easy – or comfortable.

“We spent the first two hours talking about wheelchairs because that’s what we knew how to talk about,” he said. “It took us about half a day to stop talking about kid issues.”

After decompressing, the two opened up about their goals as a couple, things they wanted to accomplish, and things that they should be doing together. Morgan’s parents say that the most important thing they’ve learned isn’t just about spending time alone.

“It needs to be enough time to decompress and detach from everyday life, mainly child care duties, to get to the point where that’s no longer your focus. That takes some time to happen,” Peter says. “I didn’t appreciate how important it is to spend quality time together so that you can cross over that point.” 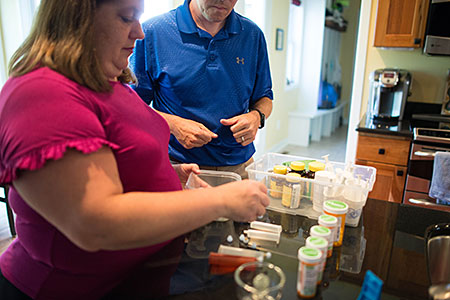 Within six months, Morgan has had three surgeries. Nevertheless, Michelle and Peter are pushing daily to improve their bond. “Having that balance is a matter of survival, and we don’t connect during those times when we’re in a lot of stress and trying to make it through the day. Our loving community helps us get through those difficult times,” Michelle says. However, David’s Refuge has not only helped them connect with each other. Both parents agree that connecting with other families has made the situation more manageable.

Despite her condition, Morgan has had a positive impact on her family and community.

“Everybody knows Morgan. As a family we stand out in the community,” Michelle says. “They’re always wondering how we do it. We do it through our community and God’s grace. 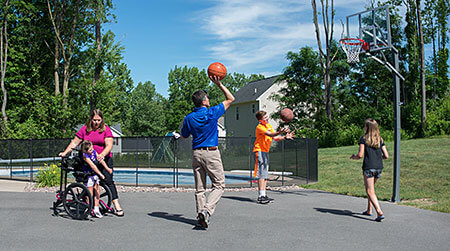 “Day-to-day situations made us the people we are today: a caring, compassionate family that loves anyone who comes our way,” she says.

David’s Refuge helps families maintain and build new relationships with other caregivers in similar situations. It teaches parents how to work together as couples; to function as teams.